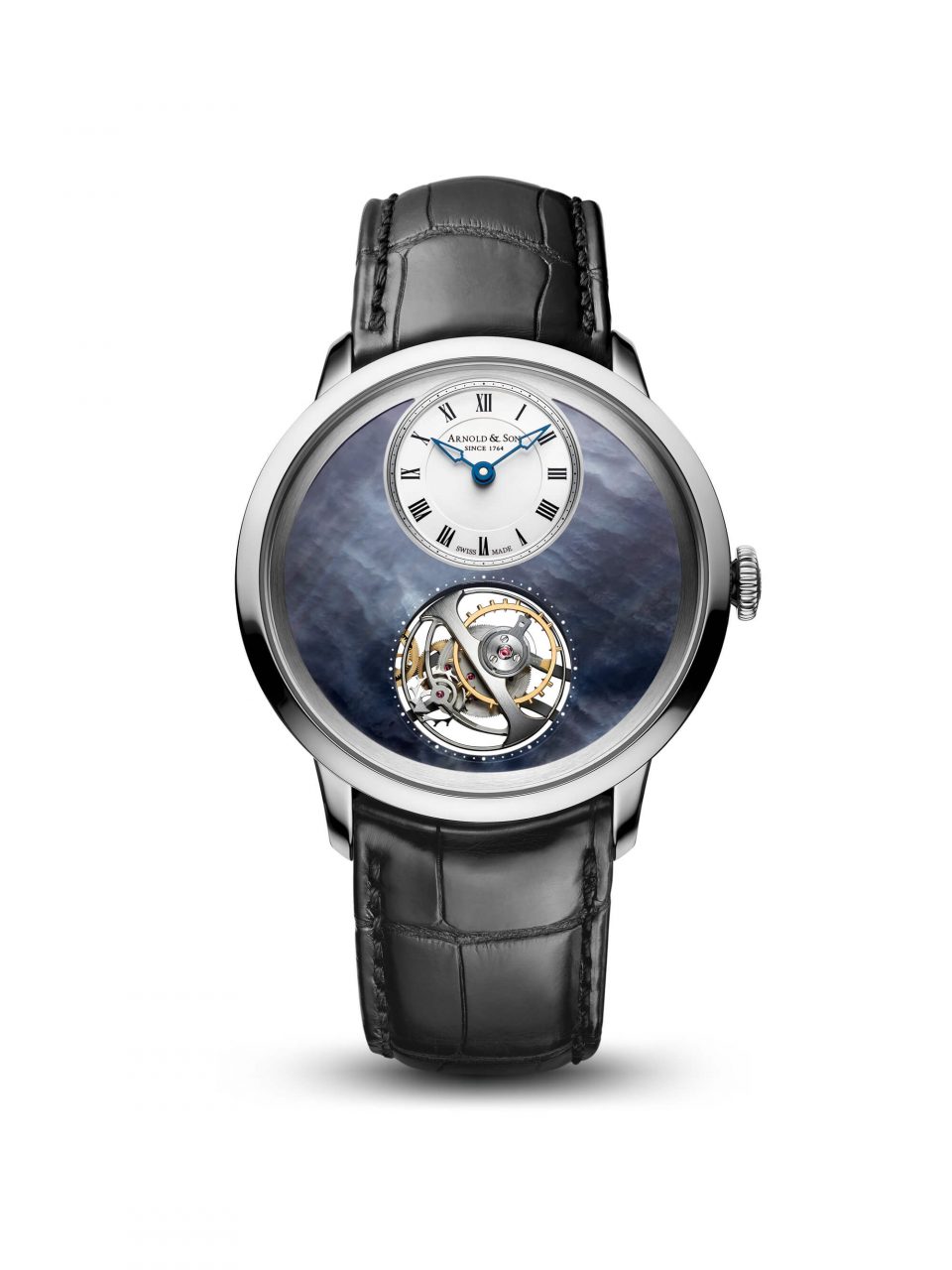 Arnold & Son unveils three new references of the UTTE.  Two references featuring stunning mother-of-pearl dials and a third reference with a black lacquered dial. Each new reference of the UTTE houses the A&S8200 movement measuring just 2.97 mm thick and the final cased watch a mere 8.34 mm. The calibre A&S8200 was developed designed and manufactured entirely in house at the brand’s La Chaux-de-Fonds workshops.

The UTTE is part of Arnold & Son’s Instrument Collection, wherein timepieces are easily identified by their dial design, with off-center position of the hours and minutes to allow for the display of other complications without one overlapping the other. The UTTE follows this design aesthetic, with the spherical tourbillon occupying the lower portion of the dial. The alluring, timeless lines of the stepped 42 mm case, which tapers from the top to the bottom, imbue this watch with an austere elegance.

The UTTE is a masterful demonstration of elegant design and superb technical prowess. The ultra-thin A&S8200 movement – and the ultimate UTTE watch – is the result of several years of research and development, and boasts important features and functions. In fact, when the brand embarked on the creation of an additional tourbillon, Arnold & Son’s team of watchmakers and engineers determined that the end result should possess unique features that would set it apart in the watch world: It had to be at the same time thin, boast a big and three-dimensional tourbillon cage and have a long power reserve.

Utilizing the most cutting-edge technology, Arnold & Son pushed the creative envelope to achieve this goal – thus developing an exceptional timepiece. The UTTE has a movement that is just 2.97 mm thick and a case thickness of only 8.34 mm, making the UTTE one of the thinnest tourbillon watches on the market.

Additionally, while the movement diameter is 32 mm, the tourbillon cage is a massive 14 mm in diameter – thus occupying almost half of the movement space for impressive visual appeal. To add further dramatic beauty to this already impressive watch, Arnold & Son created a totally spherical tourbillon cage – one devoid of any flat surfaces – for a magnificent three-dimensional aesthetic effect. In fact, the flying tourbillon cage is not inset into the calibre, but instead rises out of the movement, through the dial, and achieves the same height as the hour and minute hands. With an eye toward every detail, and the desire for harmonious appeal, the watchmakers removed all visible screws so the spherical tourbillon cage appears beautifully balanced. The only visible screws are on the regulator.

Finally, to ensure a long power reserve of at least 90 hours, the brand implemented two barrels to offer more constant force and unprecedented power reserve for an ultra-thin tourbillon.

The UTTE references are created in either 18-carat red gold or palladium (a rare alloy in the watch world). Each movement is finished in a colour to complement the case colour, and each features a differentCôtes de Genèvepattern. The 18-carat red gold reference houses the movement treated in rhodium and decorated withCôtes de Genèverayonnantes. In addition the tourbillon bridge of this reference is entirely hand-engraved by Arnold & Son’s master engraver. The palladium UTTE references house a NAC grey treated movement decorated with a straightCôtes de Genèvepattern for a bold, contemporary appeal.