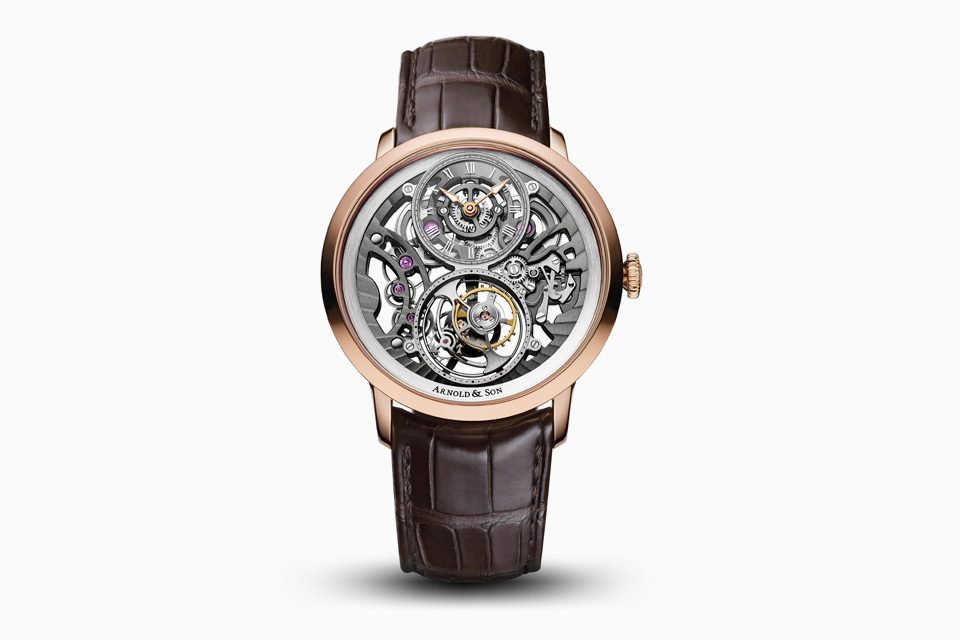 Arnold & Son extends its Instrument Collection with the addition of the new UTTE Skeleton. The watch is powered by the new A&S8220 movement and measures just 8.34 millimetres in thickness, making the UTTE Skeleton the thinnest skeleton tourbillon watch on the market. Developed, designed and manufactured entirely in house at Arnold & Son’s La Chaux-de-Fonds workshops, it is housed in an elegant 42-millimetre, red gold 5N case. This exquisite creation is available in a limited edition of just 50 timepieces.

The Instrument Collection is a series of superbly engineered wristwatches that combine outstanding precision with classic styling and reference the 18th-century marine chronometers designed to assist navigation at sea. The latest addition to this illustrious family is the UTTE (Ultra-Thin Tourbillon Escapement) Skeleton, which has been exquisitely designed as a breathtakingly beautiful, three-dimensional mechanical sculpture. Housed in an elegant 42-millimetre case that measures just 8.34 millimetres in thickness with the two sapphire crystals (7.03 without), the UTTE Skeleton is the thinnest skeleton tourbillon watch on the market.

In their quest for ultimate perfection, harmony and transparency, Arnold & Son’s design engineers have effectively reinvented the A&S8200 calibre to create the A&S8220 calibre. The new calibre preserves the unique features that set the A&S8200 calibre apart: it is thin, boasts a large, three-dimensional tourbillon cage and has a long power reserve. However, compared with the UTTE’s A&S8200 calibre, the new A&S8220 features, among other things, new barrel and tourbillon bridges and a heavily modified main plate. The movement has been skeletonized as far as possible to reveal its intrinsic beauty and complexity. The thickness of the A&S8220 calibre also needed to be slightly increased, going from 2.97 mm (A&S8200) to 3.30 mm (A&S8220), in order to guarantee sufficient rigidity while maximizing the openwork of the movement. The total height of the UTTE Skeleton watch itself remains unchanged at 8.34 mm (the same as the existing UTTE).

The tourbillon cage itself has also undergone a total revision, and the new skeleton design makes it much easier to appreciate the choreography of the pallets and escape wheel in action. At the same time, the curved, spherical design and aesthetic three-dimensionality of the tourbillon typical of the UTTE models have been preserved. The movement itself is 32 millimetres across while the tourbillon cage measures a massive 14 millimetres and occupies a dominant position in the lower half of the dial.

Finally, to ensure a long power reserve of at least 90 hours, the brand implemented two skeleton barrels to offer more constant force and unprecedented power reserve for an ultra-thin tourbillon.

The Skeleton features the hallmark dial design of the UTTE family, with its distinctive and clear-cut eight-shaped arrangement of time display and tourbillon. The three-dimensional tourbillon occupies the bottom half of the dial while the hour and minute display, made of sapphire with white printed numerals, takes up the space between 12 o’clock and the centre of the watch. The hour and minutes hands are golden with white lacquered tips.

Viewed from the side, the 5N red gold case is stepped and tapers from top to bottom, the widest section accommodating the extra-large glass with the lower part narrowing to fit snugly on the wrist.

The time, expertise and precision required to hand-craft and assemble this remarkable example of watchmaking means that the edition will be limited to just 50 timepieces.