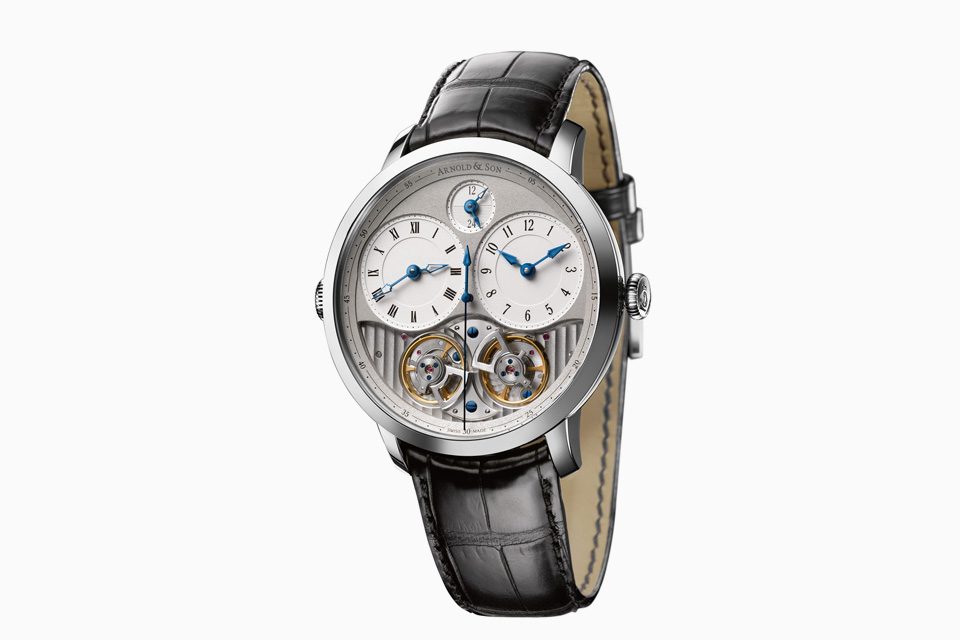 A masterpiece of perfect symmetry, the Instrument DBG Equation GMT features two separate time displays, each driven by its own barrel and gear train with its own escapement and balance. This highly unusual technical specification permits the two displays to be set independently of each other. Although it is a standard feature of watches displaying two or more time zones for the hour hands to be set to different times, being able to set the minute hand as well opens up other possibilities. It means, for instance, that the display can be set to show the precise time in zones that differ from Greenwich Mean Time by a fraction of an hour, such as a quarter or a half. In addition, a subdial at 12 o’clock shows the equation of the two time zones on a 24-hour basis. This enables the wearer to see the time difference between the two zones and also to ascertain whether it is day or night in the second zone. Both time zones share a common permanent seconds in the shape of the long slender hand emanating from the centre of the dial, which is a hallmark feature of the new Arnold & Son’s Instrument collection.

Watches with a double barrel and escapement have a tradition going back many years in horology but are rarely found today. The principle is ideally suited to the Arnold & Son’s instrument line because a separate barrel/gear train and balance/escapement enable the watch to house different complications without having one influencing the accuracy of the other by draining its energy. It is therefore perfectly adapted to be used for a second time zone, as in the DBG Equation GMT. Another practical advantage of having a double barrel/gear train and a double balance/escapement is the fact that it allows to house two completely different technical solutions and characteristics for each complication in one and the same movement. The Instrument DBS, for example, which is also being unveiled in 2012, not only shows mean solar time but also boasts a separate display for sidereal, or star, time using a specific gear train with a different/higher rotation speed than the one of the mean solar time indication.

No less impressive than the watch’s technical features is its aesthetic appeal, and in particular its symmetry, which is largely determined by the positioning of the elements in the dual movement. The view from the back reveals a pleasingly balanced arrangement of bridges, barrels and gear trains. From the front, and highlighted against a backdrop of Côtes de Genève stripes on the lower half of the dial, are two triple-armed balances secured in position by the two balance cocks, which face one another and fuse together to create a circle. Completing the overall sense of balance are the two crowns, one in the conventional position at 3 o’clock, the other at 9. The two mainsprings are both wound using the crown on the right. However, the time in each of the two selected time zones is set using its own crown, which ensures that neither of the zones is moved or changed advertently. The time zone on the left is set using the crown at 9 o’clock and the time zone on the right by the crown at 3 o’clock.