I am not a journalist, but a lover of watches and in particular the Independent Watch Brands, you may ask why? Well this dates back to my days as a child whilst other lads loved mainstream cars such as XR3i, Cosworth Sierra’s, Lambo’s or Ferrari I was more you RS2000, Alfa Romeo Spyder and Lancia Stratos sort of guy, I liked the uniqueness of those cars and the style and panache that they oozed. In short I liked to be different and not to follow the lemmings or flock down the same path and love the same old same old.

My working life has been varied but the last 18 years has been spent in the luxury watch and jewellery industry, I have been lucky enough to work with some gifted people who have created jewellery from my sketches to the masters of watchmaking and their incredible eye for detail and precision. It is a very different world from where I came but one that I have enjoyed and never become bored with, every new day brings new challenges and to be able to share what I have learned over the years to customers and people in general has been very satisfying. The education of people unaware of what masters of Horology are out there, assuming whatever is on the High Street that’s it until their eyes are opened wide to a whole new world.

In this article I have focused on a few brands that I feel passionate about, its by no means the complete list but we have to start somewhere and these brands are as good a place as any. 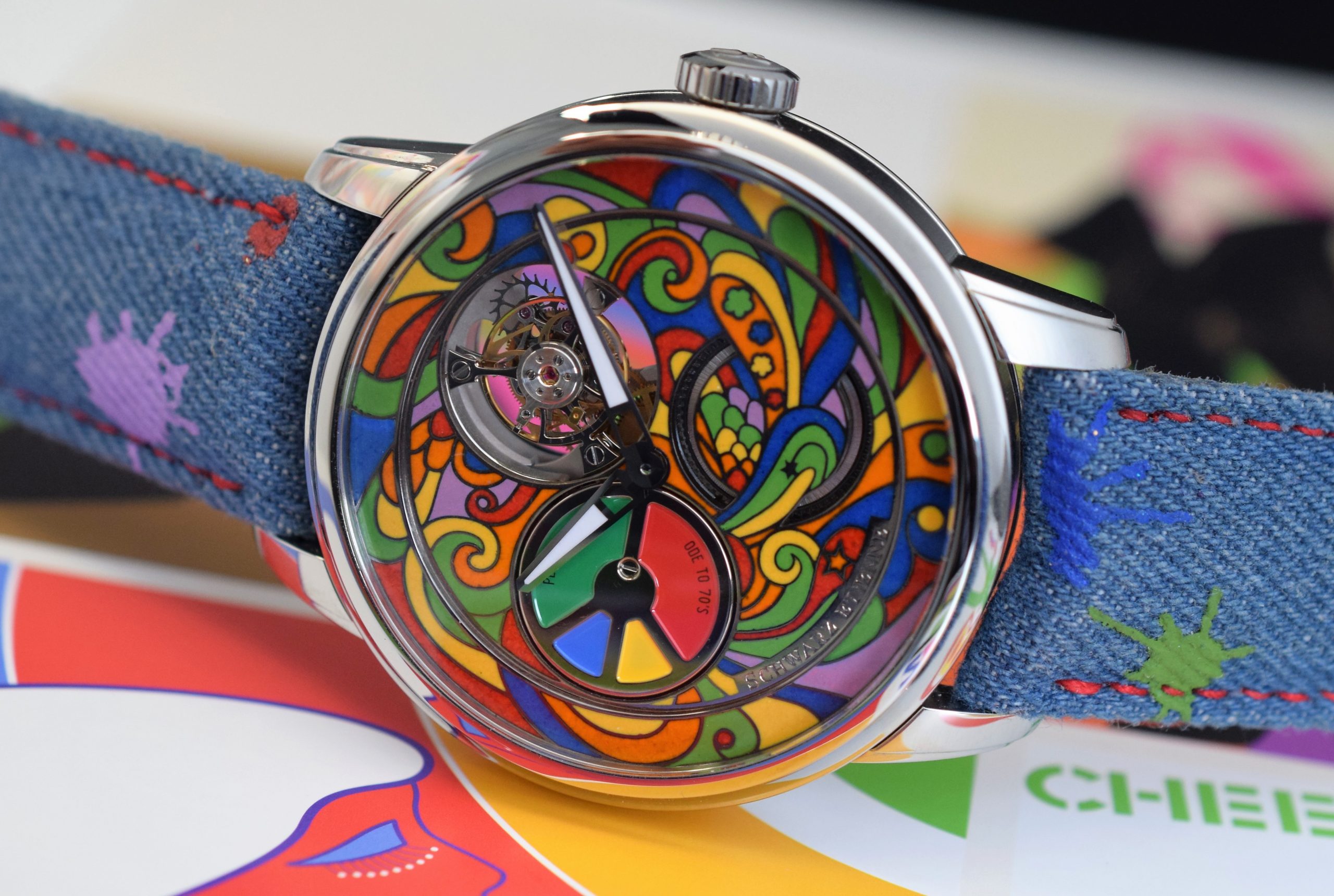 Schwarz Etienne originally a movement manufacture set up by a husband and wife team is no also watchmakers creating innovative and superb examples of horology. The above watch produced is a wonderful example “Ode to the 70’s” Limited edition, forget the look of the watch for one moment this is a totally inhouse made movement including the hairspring which make SE one of only 3 hairspring manufacturers in the world, then add in that this movement has been reversed and has a micro rotor showing in the dial and then it’s Tourbillon.

The dial on the “Ode to the 70s” starts from the unusual 18CT Whit Gold base plate with white gold wiring segregating the array of coloured enamel swirls. It takes a true artist and skill to perfect such a dial and no mainstream watch brand dare attempt to do such a thing which is what makes the Indie’s so unique.

Schwarz Etienne manufacture all their own movements which makes this small independent watchmaker a different player as it controls its own destiny in manufacture. This has attracted other brands to use movements created by SE in their watches with power reserves ranging from 86Hours to 4 Days throw in a few Tourbillon and Petit Second Retrogrades this Maison has proved it can mix it with the big boys. Check out the Ladies Fiji with its beating seconds at 6 o’clock and an array of brightly coloured straps and dials to compliment. 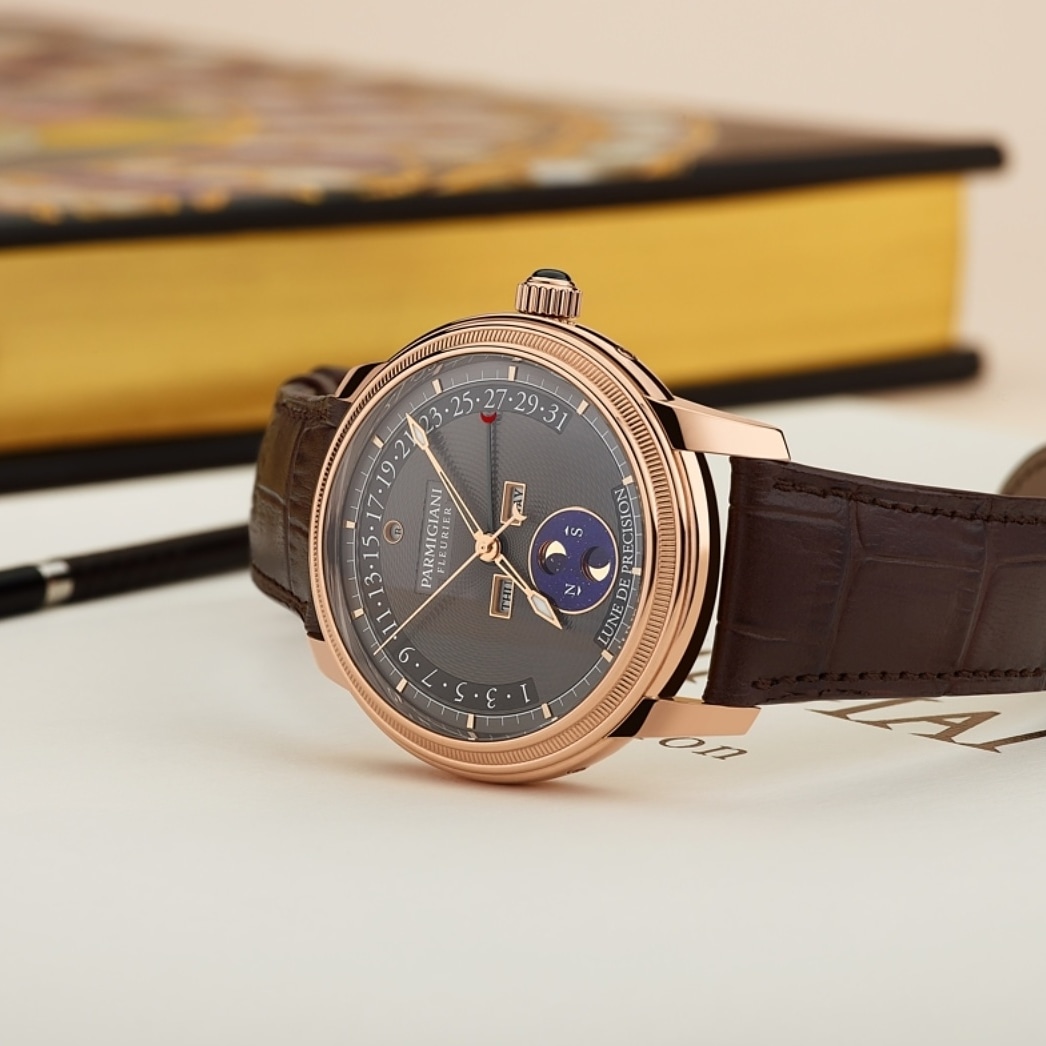 Parmigiani Fleurier is a brand that some may know but not all and yet this Maison of Horology boasts a skill set and manufacture that the well known high end brands can only dream of. I have had the pleasure of working for and seeing the manufacture facilities warts and all in my time, I have met the designers, engineers, watchmakers, setters etc. and a nicer group of people you could not wish to meet. To top it all the company founder Michel Parmigiani apart from being a genius watchmaker and restorer is one of the nicest men I have worked with.Michel has a passion and love of timepieces and restoring former historical pieces from the Patek museum to the Sandoz Family collection which has inspired him to produce modern day twists on historical instruments of time.

The attention to detail by Parmigiani, the hand finishing of every watch and seeing the care, effort, quality and craftmanship that go into making all their watches is incredible. A mirror finished bridge on a Tourbillon will take 20 hours work to ensure its perfect and that is just one bridge, this level of detail delves deeper into the heart of the movement. The base plates are all finished even the parts you don’t see its Horological etiquette at its best, the edges of the bridges all polished and beveled to 45 degrees even the screw holes are polished.

The array of Calibre’s and complications produced by Parmigiani have attracted brands from the top end of the watchmaking world to use as their own, a beautiful beating power house at the centre of many prestige brands. Watch houses don’t just come to Parmigiani for movements. There are dials, cases, components and escapements also produced for other brands. It’s a form of flattery that this small Maison should do so much for its competitors.
Ultimately the facilities that Parmigiani boast gives them a unique position 100% Swiss Made, an accolade not many can follow and a freedom of design that has gripped many connoisseur and collector of watches with special bespoke watches to order if having one of their Ltd Ed wasn’t quite Ltd enough.
Michel’s philosophy is that his watches be created so that in hundreds of years whatever watchmaking looks like then someone will look at a Parmigiani and say I am going to restore and maintain this.

In 2010 I started working with Bremont, a fledgling British watch brand who’s inspiration where the past masters of Arnold, Much, Tompion and Harrison to name a few, Arnold was a particular favourite of mine and one that I would regard as being the most important watchmaker of his day. A good friend of Breguet who was based in London at the time. The two men shared many an idea and assisted each other and who’s sons would swap fathers to learn and develop each other’s skills.

Arnold & Son is now very much a Swiss brand but that hasn’t let them move away from its heritage in fact the Instrument Collection pays homage to John Arnold creations with the Dial Side True Beat (DSTB), Time Pyramid or the Eight Day being a few that have been re-created from clocks into wrist watches. Arnold was watchmaker/clockmaker to the Royal Court and clockmaker to the Royal Navy indeed he took Harrisons ships chronometer and made it more accurate and easier to develop so it could be made for all the fleet and not just a certain Captain Cook. John Arnold also created what was deemed to be an accurate pocket watch, the No.1 which was given to a Captain Phipps who took it on his exploration to the North Pole and reported it to be accurate and most helpful in determining Longitude.

It is easy to carry on with this history lesson, intriguing in every way that men without all the tools that are possessed today could create, invent and make such complicated and yet exquisite timepieces which have helped plot longitude and latitude so that we may all travel with certainty today.

The owners of John Arnold have kept his spirit alive with Tourbillons, Dual Time GMT’s, Skeletal dial, Perpetual Moonphases and a skill level of the highest caliber, it is a brand where I am so spoiled for choice as to which is my favourite. 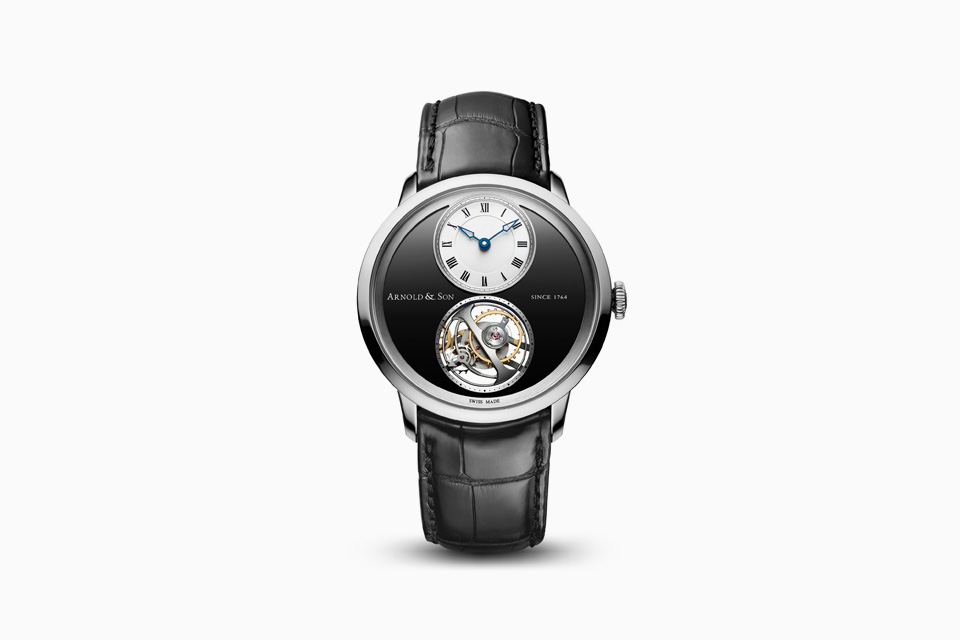 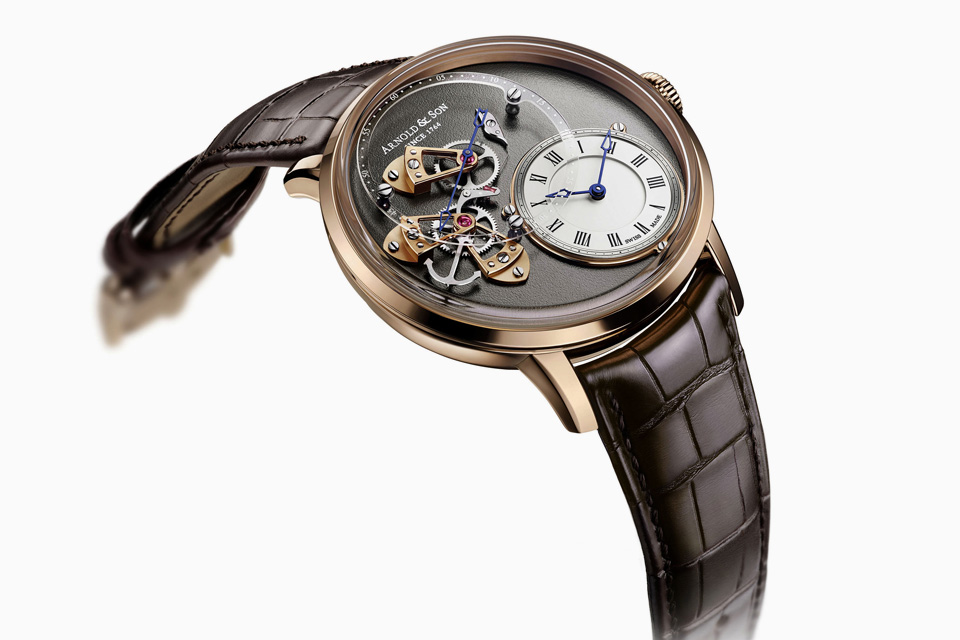 The above two watches show the DSTB Dial side true beat in Rose Gold and the UTTE Ultra thin tourbillon escapement, the cases are sublimely finished and I am a big fan of this type of dial layout.

That’s it for the Swiss brands for now and next we head across the border into Germany home of Glashütte and some incredible high end watchmaking and in particular Tutima Glashütte/SA who originated in the 1920’s near Dresden and then with the onset of World War 2 relocated to the former West Germany until reunification when it returned to it’s home. A purpose built facility opened up in the 2000’s and started a new era for this superb watch manufacturer. Tutima created a range of watches from the affordable to the complicated and its attention to detail, skilled watchmaking and wonderful finishing of those Glashütte bridges make this marque stand out. 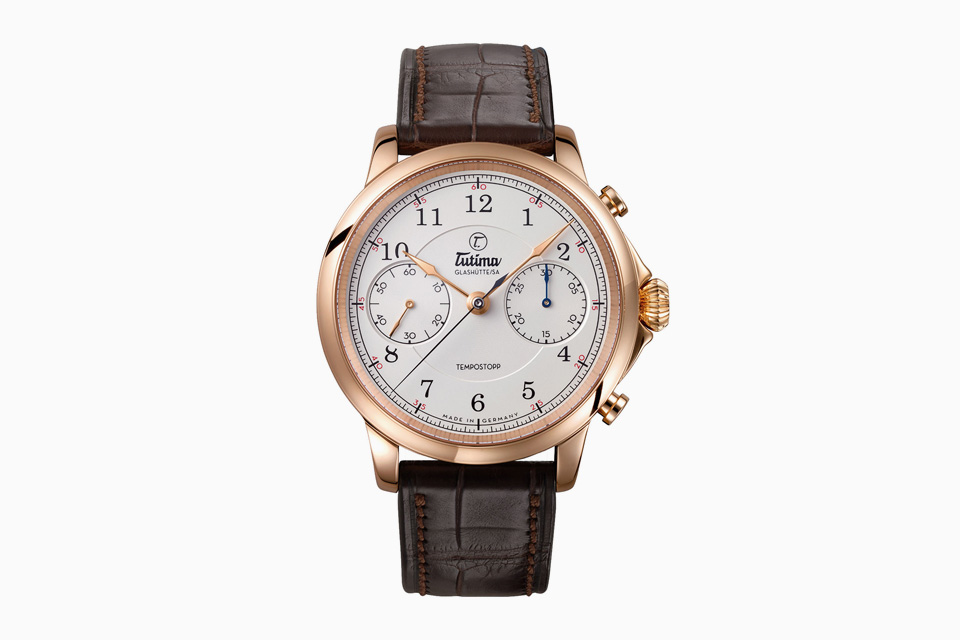 The Tempostopp (shown above) is an 18ct Rose Gold Flyback Chronograph, the clear, legible dial and precision build quality synonymous with German engineering are apparent as soon as you take this watch into your hands. Tutima also make robust steel and titanium models and because of their reliability, clarity and robustness mean they have become not only the official watch brand to the German Air Force but also Nato’s Pilots too.

Tutima really is a brand for all people incorporating simple entry level watchmaking right through to High in-house complications like the Homage. The Patria for example available in steel or gold incorporates a variable inertia balance and Breguet overcoil to help with accuracy, something you would normally only find in 5 figure RRP is available for less that half, but that doesn’t mean that you get any less of a watch, in fact quite the contrary, the finish, decoration and build quality mean it more than holds its own in the vast world of watchmaking.